Simply Soothing, Inc. is a family-owned and operated business based in Iowa. They have been creating unique, handmade products for over 15 years, with an emphasis on high quality for a reasonable price.

Looking for a DEET-free bug spray made from skin-nourishing, natural ingredients? 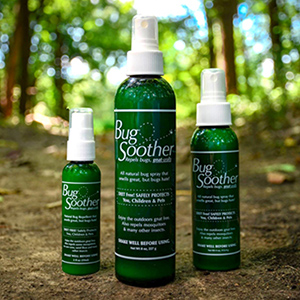 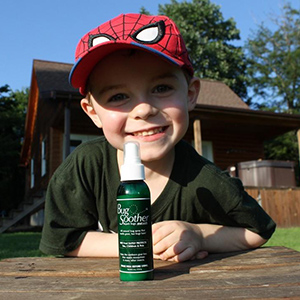 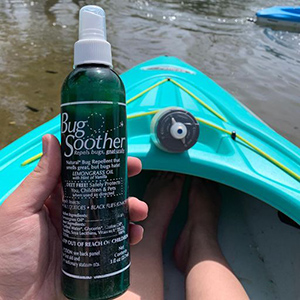 The Story of Bug Soother

In 2008 during the floods of the Midwest, Freda Sojka developed a natural bug repellent*, called Bug Soother. She originally created it for her five month old grandson because she did not want anything with harsh chemicals, especially DEET, being used on him. She gave a sample bottle to her sister to try. Her home on the Cedar River had been flooded, and the gnats were terrible. Some men from the Carolinas were measuring flood waters, and trying to work in a swarm of gnats. She gave the men a quick spritz and instantly the gnats went away.

The next day, a man came into her little shop on Main Street, and asked if she made the bug spray. He told her that his workers had come back to the motel the night before, asking him to get them some of that bug spray. He bought everything she had made up. Little did she know, that experience would set the pace for our new product. From the very beginning, Bug Soother sold faster than they could make it, and for the next two years, they continuously sold out everywhere they had the spray. With a low budget, and no advertising, it was strictly by word of mouth.

In 2010, they got a jump on the season, and actually went out for the first time to 'sell' their natural bug spray in a 60 mile radius to golf courses. 9 out of 10 golf courses bought the spray from them, without knowing whether it worked or not. Golf courses have come to be one of their best marketing tools.

The next year, 2011, they were approached by a nearby grocery store that wanted to sell their natural bug repellent. Over a six week period, that little grocery store in a town of 1800 sold over 700 bottles. The manager was surprised at how well it sold. He had been in the grocery business for years and wanted to help boost their product to the national level. With his help, they were able to get a meeting with a grocery distribution company that bought their first pallets. Their first pallets were made in the basement of their old building on Main Street, with the help of friends. They borrowed their local grocery store's fork truck to load those first pallets.

In 2012, they bought a larger building and started making Bug Soother in larger quantities. Steve Stout, a retired salesman, went out to many types of retail locations to sell Bug Soother. Hardware stores proved to be another of their larger outlets. They ended up with product in two Ace Hardware distribution centers the following year. Bug Soother made the new product list in the National Hardware Retail Association Magazine, and they started getting attention on a national level.

By the spring of 2014, Simply Soothing had a warehouse rapidly filling with Bug Soother, preparing for a busy season. The customer demand was so great in the Midwest, that they had difficulty meeting that demand. In addition to selling nationwide, Bug Soother was approached to go international. They found a way to stabilize a concentrate, so that it could be shipped Internationally. That same year, they traveled to Panama and Colombia on an Iowa Trade Mission, to explore possibilities in Central America. They were met with much interest to export. They attended an international tradeshow in London the following year, and again met with wide enthusiasm across the world.

Since then, with help from CIRAS, EDC and their good friend John Dotson, they have continuously been working to improve their process, business strategy, and to increase and meet demand.

Today, Bug Soother is sold in over 10,000 retail locations across the U.S., as well as being sold around the world. 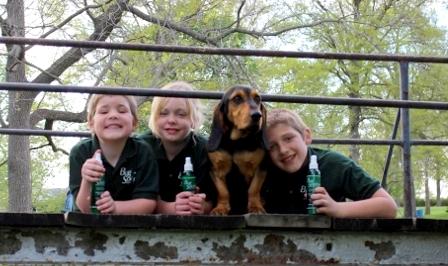 WHO CAN USE BUG SOOTHER?
Adults, kids, pets, livestock, tigers, and more. Please note that they do always recommend that you try a “skin test” with ALL products and/or consult a medical professional when trying ANY product for the first time, whether natural OR synthetic!

WHAT IS BUG SOOTHER'S SHELF LIFE?
We recommend that you use your Bug Soother within 2 years of purchase. So why not stock up for next season, too?

ARE YOUR PRODUCTS TESTED ON ANIMALS?
No. None of our products are tested on animals. We use only non-toxic ingredients, with lower levels than in other leading brands.

WHY WAS IT IMPORTANT TO MAKE A DEET-FREE BUG SPRAY?
Bug Soother was created to be gentle enough for children & those with sensitive skin, yet strong enough to be effective against flying pests like mosquitos & black flies (gnats.)  It is important for them to keep Bug Soother as NATURAL* and effective as they can, nourishing your skin with natural ingredients* AND protecting you from bug bites. Their natural ingredients* also help give Bug Soother it’s amazing “Scent of Summer” that smells great, but bugs hate!  Some describe the scent of our natural* bug spray as vanilla ice cream, cookies, cake, refreshing citrus, and more. Bug Soother is environmentally friendly due to not using any kind of aerosol.